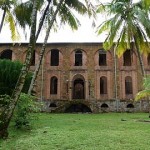 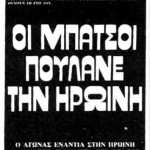 The activity –the official at least- of individual operators of power beyond the management-process part includes and the part of reforms. Many of reforms emerged after struggles and pressure from social groups from the underground. We can described them as conquests or as forced concessions from the state, to keep it’s power. From another option, who is the most popular, the state is considered as necessary structure who care about its nationals and their prosperity . Then it makes these improvements when deems it necessary. With new plans of laws and changes of older “everytime with the care of civilian, of the society, of country, of nation”.

Recently, posted at a regime newspaper, without denial from anyone who involved, Government’s intention to proceed to “decriminalization of possession of soft and hard drugs if proven to be for personal use”. The law-draft is under elaboration from a commission that justice minister H. Kastanidis(1) was set on and it will be announced when it will be ready at the parliament for voting.

Someone have maybe some questions now. Pasok(the authority party) decided to make effect its election engagement who has for years? It cares about the decongestion of prisons(many of people who is imprisoned, are for micro-delinquency cases who connected with use and possession of these drugs)? They listen to the “legalize-it” requests? Or maybe is the time to recognized the infamous right of ownership and to hit the traders?

Away from hasty simplifications and extrapolations, everything happens can’t seemed disconnected from each historical context that we meet it. Doubtless, we are in a period that the capitalistic system “is tested”, local and global, from one more(of many) crisis that made by its own, with some new features than past. The control(of crisis), like every time, passing by the backs(and sometimes the corpses) of them who are in the base of authoritarian pyramid(dominated people exactly) and them who now “transferred” from the middle to down(small holders etc). A part for process is the consent of dominated with every average. A “smart” weapon to this direction is drug addiction. The indirect and invisible repression, also, with every narcosis is usually more effective than direct.

There are many examples in history (till now) who show, that the using such methods is the standard practice of the state at difficult periods(for this) of systemic crisis against “annoying” social groups and all who must be obedient, irresolute and completely controlled. From hippies to ghetto of metropolis and from the doped soldiers of Vietnam’s war to the drug paradise of prisons. In helladic area seen an elation at trading and using of drugs, especially at big cities, after the ages of political changeover- a period of many social and political fermentations and struggles. The recent case of Argentina with dirt cheap “paco”(substance who made by residues of cocaine) can’t passing unnoticed!(2)

Nevertheless, at many countries these substances are illegal(according to the bourgeois legitimacy). Finally, the before words for policy and tool  are unfounded or maybe things are not so simple?  Η παρανομοποίηση of a situation determined by the state and with its terms(penal code). Its retention (again from the state) is about: either let something to work as illegal and control it or it continues to features and faces it as illegal but without the controls.

At the first case included the control of drugs and migrants -the migrants as work force that depending on the needs it is useful or unnecessary. It is open secret also, that from an amount and up the majority of involved is known to the authorities. The arrests that happens usual, although for the eyes of people primarily, are indicative about who controls and directs the “game” and with whom tolerance. The second case is about the situations who are essentially and not ostensibly illegal, or simplest, are threatening for the proper operation of the system.

On some arguments in favor of decriminalization. Surely not lead to jail he that will meet the…criteria. Maybe will released people who convicted the relevant categories. The state now will not have the “touch” to involve, to thorn, to suppress people and venues with the occasion of the holding and handling. As long as beautiful and fairly you listen the above we must to interpret them considering how the power works and the historical conditions that we experience now. In capitalistic system, how feasible is self-determination of mind and body and where are its limits? In an environment of exploitation, oppression, alienation, insecurity, stress goes for the worse by the day…

The aim of this text isn’t to attack or to load responsibilities to user (addict or not). It is a try to approached critically how and when the state choose to get the powerful arrow out of the quiver, that called narcosis through dependence from drug substances and marked directly to the target.

“I know that they never mark to foots. Mind is the Target, your mind eh?” (3)

1. Harris Castanidis isn’t now minister of justice. The text was made at May of 2011.

2. A documentary at greek language about “paco”: “The drug was born by crisis”

3. A part of Katerina’s Gogou poem that contained in the book “Three click left” of 1978.

This article was first published in greek at a zine called “Rigma”, issue #3, in Xanthi at June of 2011. 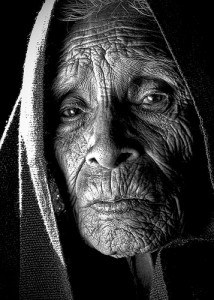